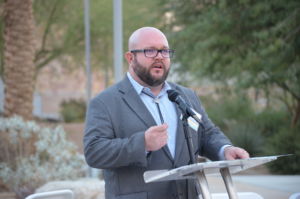 T. Robert “Dr. Bob” Przeklasa has been with California Indian Nations College since the early planning stages. He serves as the Vice President of Academic Affairs, focusing on all aspects of the College’s academics. Dr. Bob ensures course offerings are ready for each coming term while building towards eventual accreditation and securing partnerships with local colleges and universities. He has worked closely with Southern California tribal communities and organizations through his academic research on the political history of the local Indian Country. Przeklasa received his doctorate in Native American History from the University of California, Riverside in 2015 and serves as a board member of the Native American Land Conservancy. 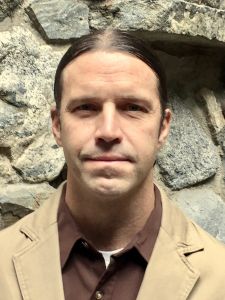 David Mix, Director of Institutional Advancement, is responsible for growth at California Indian Nations College. Raised in the Inland Empire, David attended the University of California at Riverside for two years, and quickly realized he needed to search for a radical and traditional education. After working at the Rough Rock Community School on the Dine’ Reservation, he spent a decade learning traditional medicine and ceremony, which led David to Sacred Sites organizing and advocacy work on Lakota/Dakota/Nakota treaty land. A one year internship at Thunder Valley Community Development Corporation became four+ years of research, fundraising, and program development, including successful coalitions and partnerships for economic development, sustainability, and energy projects. David’s 15 plus years of work in Indian Country has helped build bridges to opportunities that have created lasting impact. David holds a Master of Arts in Urban Sustainability from Antioch University, Los Angeles, and spends his leisure time singing at powwows and other community events, or playing outdoors with his wife, daughter, and son.

Daisy Ocampo is here to support student success! Her community outreach builds positive relationships with various local tribes to create education opportunities for Native students. She is the primary point of contact to inquire about class offerings, registration, financial aid, textbook purchases, Disability Services, and transcript reviews. Daisy is from the Caz’ Ahmo Nation from the state of Zacatecas in Mexico and grew up in her community in Los Angeles. She moved to Riverside, CA to pursue a college career and is now is a Doctoral Candidate in the UCR History Department. Daisy is passionate about transforming education to increase Native student representation in higher education. Upon meeting Theresa Mike and learning of her educational vision for a tribal college, Daisy became a Founding Member of the California Indian Nations College.

Ryan Mariano has worked in academia for the past five years and has experience working in higher education. He has done clerical work, administrative work, and event coordinating. Ryan is excited to embark in this new chapter in his life by joining the California Indian Nations College. Ryan hopes that he can being his expertise to help create an institution that will help students with their educational aspirations.

Dr. Frank Cárdenas was raised in the Yarborough of Lake Elsinore, California, of Onkwehonwe, Mennonite, Éireannach and other descent. A transfer student from Riverside Community College and Palomar College, he has completed an Irish Studies Certificate from the University of College, Cork Ireland (2008), and B.A. ‘s in History and American Indian Studies from UCLA (2009). He earned his M.A. in Language, Literacy & Sociocultural Studies (LLSS) from the University of New Mexico in 2012 with a specialization in American Indian Education and his doctorate in 2019 in the same field. His doctoral research focused on the philosophy of education of D-Q University & NAS of UC Davis co-founder Jack D. Forbes. He has worked in various education settings and capacities since 2004, and is also currently adjunct faculty of American Indian Studies at Palomar College in San Marcos and Bonsall High School. He is honored to be working on behalf of California Indian Nations College, fulfilling a dream of developing a tribal college in southern California.

Courtney Hampton, a Palm Springs native, is an Academic Coordinator and Instructor with California Indian Nations College. She holds a B.A. degree in Communication Studies and a Master’s degree in Business Administration. Courtney comes with over 10 years’ experience in college and university settings. She brings a wide range of knowledge and skill sets both in operational management as well as student support specialist, advisor, coach and mentor in communicating with a diverse population of students. She is dedicated and committed to carrying out the overall college mission and helping each and every student accomplish their educational and career goals. 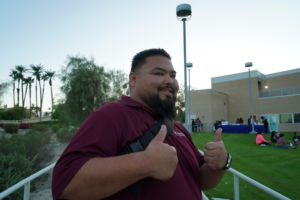 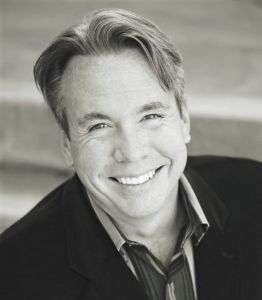 Ronald A. Stewart, Ph.D.Professional Consultant
Ronald A. Stewart holds a Doctorate in Organizational Behavior Studies, Leadership & Philanthropy from The Union Institute and University, a Master of Nonprofit Organizations from Case Western Reserve University, and a Bachelor of Arts in Rhetoric and Communications from Kent State University.
Among the hallmarks of Dr. Stewart’s consultation work within the private, nonprofit, and public sectors are his tailored, practical solutions for organizations, staff, and volunteers. His services include a wide array of capacity building interventions such as training, executive coaching, executive search, board development, planning, evaluation, discussion facilitation, and fundraising.
A native of rural southeastern Ohio, Dr. Stewart is keenly aware of the need to engage young people, especially those from Appalachia, in the consideration of contemporary global issues and to encourage their participation in the delivery of local and global solutions inspired by these increased awarenesses. In 2010, Dr. Stewart established the Ronald A. Stewart Fund for International Study and Service at Case Western Reserve University’s Mandel School of Applied Social Sciences to award qualified students with scholarship assistance so that they may engage in study and service around the globe.
Toggle Sliding Bar Area