On track to be the first accredited, two-year tribal college in California.

California Indian Nations College began with a Strategic Planning Committee comprised of over 35 members who form a coalition of constituents from Southern California Indian Country. The Committee lives on as the CINC Advisory Committee and supports a vision to establish a two- year, accredited college with a curriculum that incorporates indigenous culture, Native language revitalization, and the re-institutionalization of traditional Native American values.

With the support of the Twenty-Nine Palms Band of Mission Indians, local Native communities, College of the Desert, and the Native and non-Native members of the advisory committee, CINC has become a reality. The College was chartered by the Twenty-Nine Palms Band of Mission Indians in September of 2017. Early the next year, the same tribe generously provided seed money to support the initial staffing of the College, enabling it to quickly get off the ground. The University of California, Riverside (UCR), graciously offered to sponsor the College’s offices for its first two years at its Palm Desert Graduate Center where it has also rented classroom space to CINC. With that, the staff hit the ground running and the College taught its first classes in cooperation with UCR Extension in Fall 2018.

Due to accreditation strictures, CINC formed an instructional partnership with College of the Desert (COD), a California community college located in Palm Desert, in the Spring of 2019. This partnership ensures that all classes offered by California Indian Nations College are fully transferable, backed by COD’s regional accreditation through the Accrediting Commission of Colleges and Junior Colleges (ACCJC). Under the leadership of President/Superintendent Joel Kinnamon, COD has been fully supportive of CINC and its students and has pledged to walk together with CINC through its initial accreditation.

CINC aims to become the first stand alone, fully-accredited tribal college in California in decades. According to the American Indian Higher Education Consortium, there are 37 accredited Tribal Colleges and Universities in the United States of America. However, not one accredited Tribal College or University is located in the state of California. The leadership of ACCJC is very supportive of CINC’s efforts and has been helpful in guiding the initial steps towards eligibility for accreditation. The academic plan aims to first offer a broad associate’s degree program, covering general education and scholastic skills preparing students to transfer to any four-year institution in any specialty they wish. A certificate program is also in the exploratory phase. Once established and accredited, the College will explore additional degrees and programs based upon community needs. 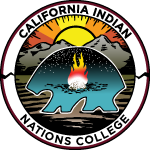 Our seal depicts the California mountains, sunrise, and sunset to remind us that each day begins and ends with the sun.  The cracks on both sides remind us of broken promises and treaties.  The turquoise bear in the center represents the California bear in our state’s flag.  The campfire in the belly of the bear correlates to the “lamp of learning,” and signifies the burning desire to learn.  The stars above the campfire represent all the California tribes, both recognized and unrecognized by State and Federal governments.  Our seal also represents the Native way of learning “under the stars” with grandfathers, grandmothers, fathers, mothers, brothers, sisters, extended family, and ancestors, along with the local Indian community.

The California Indian Nations College (CINC) maintains a policy which prohibits the discrimination and harassment of one CINC member by another CINC member on any basis including, but not limited to, race, age, color, religion, sex, gender, pregnancy, marital status, national origin, tribal affiliation and non-tribal affiliation, physical or mental disability, medical condition, veteran status, sexual orientation, and ancestry.